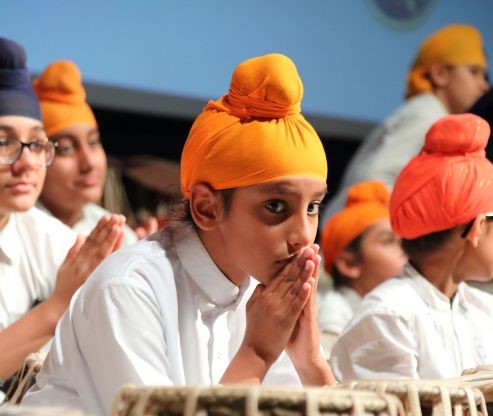 As part of National Inter Faith Week, Kent Equality Cohesion Council working with local community and faith organisations arranged a special event at the Woodville to commemorate the 550th Birth Anniversary of Guru Nanak Dev Ji, the founder of the Sikh faith. Some 600 people were in attendance from around Kent including representatives from Christian, Jewish, Muslim, Hindu and Buddhist faiths.

Highlights from the programme included talks by renowned academic Dr Opinderjit Kaur, Director of the Centre for Sikh and Punjabi Studies at Wolverhampton University, popular artist Dilmeet Kaur who is based in Glasgow and Gravesend based academic Rajvinder Singh Gill. There was also a programme of spiritual hymns and speeches from different faith representatives. One of the highlights of the programme was a vast exhibition which was donated by the Indian High Commission. This displayed in great detail and artistic creativity, the prolific life of Guru Nanak Dev Ji, his many teachings and how these teachings are still relevant to this day. The exhibition has made an extensive tour around the UK and Europe and was seen by the communities of North Kent for the first time.

Light refreshments and drinks were kindly donated by the community and were provided to all those attending by volunteers who gave up their time to contribute towards the celebrations.

Gurvinder Sandher CEO of Kent Equality Cohesion Council commented, “I was humbled by the positive response we received from communities across Gravesham and Dartford who came out to support this important celebration which marked the 550th Birth Anniversary of Guru Nanak Dev Ji, the founder of the Sikh faith. We were really pleased to be able to tie this event in with National Inter Faith Week and to have an inter faith element to the programme. Guru Nanak Dev Ji himself was a great advocate of breaking down barriers such as religion, race, social standing and striving towards a shared humanity and these beliefs resonate deeply with the themes of Inter Faith Week.”