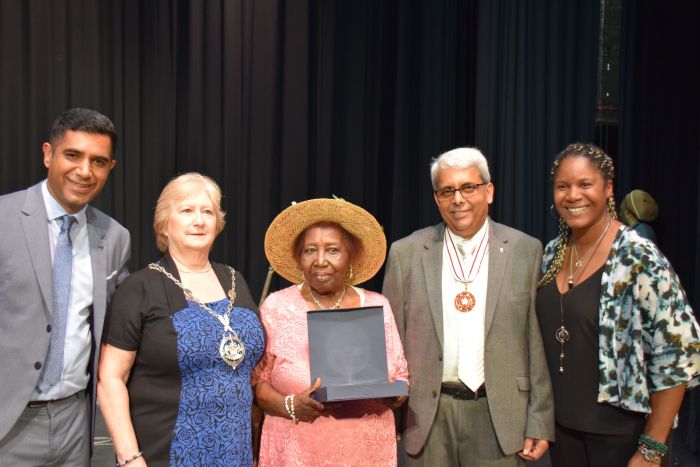 The 70th anniversary of the arrival of the SSE Windrush took place on Tuesday 16th October at the Woodville in Gravesend. The event was organised by Kent Equality Cohesion Council in partnership with Gravesham Borough Council, the North Kent Caribbean Network and 2B Scene Theatre and celebrated the significant contributions made by the Caribbean communities to the borough. The event was also supported by funding from the KCC Members Fund.

The celebrations were opened with band Common Denominator who played classic reggae songs as some 250 guests made their way into the Woodville. There were also poignant dramatic performances around the theme of immigration and early racism experienced by the Windrush generation upon their arrival into the UK in the 40s by artists Caroline Muraldo and Gravesham resident Gary Cordice.

Special awards were presented during the evening recognising the many achievements and contributions to the borough by local entrepreneurs, business owners and community workers. Winners included Elliot Reid from Revitalize Health and Fitness Clinic and Thomas – James Bramble a young footballer currently playing for Gillingham FC. Others recognised included local barbers, Kimoy Kirnon and Paul Williams, Claudette Bramble who runs the Caribbean Active Retirement Group, Earlyn Francis local restaurant owner, and the Gravesend West Indian Football Club who enjoyed much success between 1984 and 1995.

A special life time achievement award was presented to local celebrity/midwife Sister Ursula Sullivan affectionately known as ‘Sully’. The award recognised Sister Sullivan’s journey from Trinidad to the UK in the early 40’s where she encountered social isolation and racism through to her extensive and ground breaking work as Head Nurse at the Antenatal Clinic at the Gravesend and North Kent Hospital. It is believed that Sister Sullivan stopped counting at 1,500 when asked how many children she had delivered over the years.

Gurvinder Sandher the CEO of Kent Equality Cohesion Council commented, “I am incredibly proud to have put on this event in partnership to not only celebrate 70 years since the arrival of the SSE Windrush but to also recognise the many positive contributions the Windrush generation have made to the UK. To have so many guests in attendance celebrating the 70th anniversary during Black History Month really speaks volumes and I am so pleased that we were able to recognise and commemorate the prolific legacy the Caribbean community has established over the years here in Gravesham.”