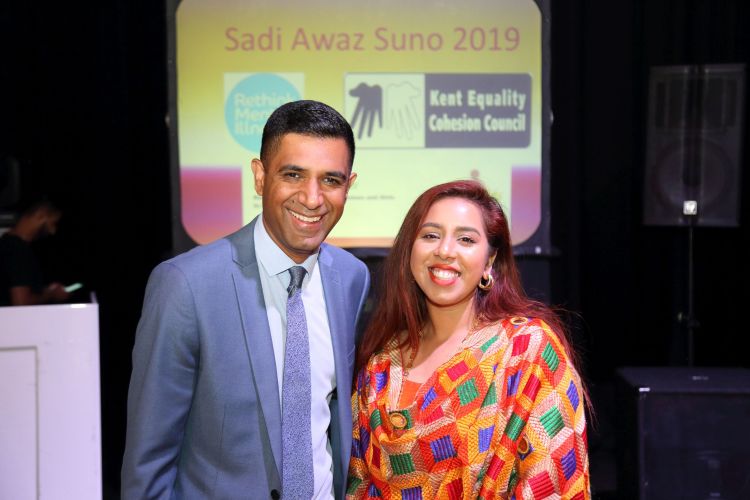 The annual Sadi Awaz Suno (Listen to our Voices) Women’s Conference took place on Thursday 19th September at the Woodville in Gravesend. The aim of the conference was to raise awareness of issues relating to mental health, modern day slavery, alcohol abuse and general well-being, issues that are not always understood or discussed within some of the communities locally, who hail from the Indian Sub-continent.

The conference was organised by Kent Equality Cohesion Council and Rethink Mental Illness Sahayak Services with the support of the Gravesham Borough Council led Altogether Safer Project. The audience of around 300 women heard from Kris Eberlein from Kent Police about the work that is being done to tackle modern day slavery , what to look out for and some of the barriers Kent Police have found with victims coming forward. He was joined by Kulbir Pasricha who spoke about honour based abuse, forced marriage and the help and support available around these issues. The key note speakers Bhupinder Kullar and Gurbax Kaur from the Sikh Recovery Network spoke about the importance of making use of support services and to move away from the cultural norms that exist within some communities from the Indian sub-continent, where alcoholism isn’t necessarily understood or addressed.

Gurvinder Sandher the CEO of the Kent Equality Cohesion Council commented “Mental health or alcohol abuse does not discriminate; they can happen in any community, whilst issues such as modern day slavery and forced marriages are prevalent in some communities more than others. That is why events like this are so important to raise awareness of issues that are not openly discussed amongst communities from the Indian sub-continent and to provide information where people can go for further help and support.”

According to Carol Gosal Rethink Mental Illness Service Manager for Kent, “I am very pleased with what we were able to achieve with the conference and the feedback has been positive. It is important that we continue to educate the local community especially those who have English as a second language where they need to go for help and support if they or members of their family require it.”