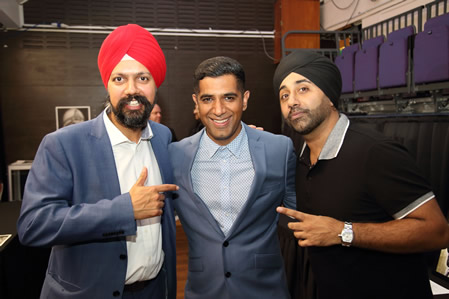 300 local residents attended a special film premiere at the Woodville in Gravesend on Wednesday September 27th titled “The Journey”. Produced and written by Kent Equality Cohesion Council and Cohesion Plus working with Samuel Frain of GMM, the film featured local residents sharing their journeys. The subjects the film looked at included Indian Partition, the role Sports and Culture have played within communities with origins in India in showcasing Gravesham on a national and international stage and the history of the Sikh community in the borough, exploring the evolution of the Gurdwara and the social challenges that had to be overcome.

Work has been taking place across the borough for the past 4 months to put the film together, over 50 local residents feature and the film captured the period from 1947 to the present day, the highs and the lows, and how through lots of hard work Gravesham has evolved into a borough which is recognized nationally for its positive community relations. Further screenings of the film are being prepared for the coming months and there will be a limited DVD release.

Bhangra Superstar Jassi Sidhu also performed a short set fusing the sounds of UK and India, showcasing how bhangra music has evolved over the years. There was also an arts exhibition featuring local artists to underline the fact that 2017 is the UK-India Year of Culture.

According to Gurvinder Sandher the CEO of Kent Equality Cohesion Council “We put a lot of time and effort into making the film. I wanted to capture the stories of the local community telling their stories so that future generations can learn about their journey and how we have reached where we are today. The Indian diaspora is involved in every facet of life in Gravesham from business to politics, the NHS to local government, from sport to the arts and the voluntary sector. This has not just happened by accident and I wanted to share these stories and celebrate the positive achievements as part of the UK-India Year of Culture. I am very grateful to all the local residents who contributed and I hope it is something that Gravesham as a borough can be proud of in years to come.”

The project was supported by the Big Lottery Celebrate Fund whose aim is to celebrate your community through bringing people together.

Project partners for the event were Kent Equality Cohesion Council, Cohesion Plus and Gravesham Borough Council.