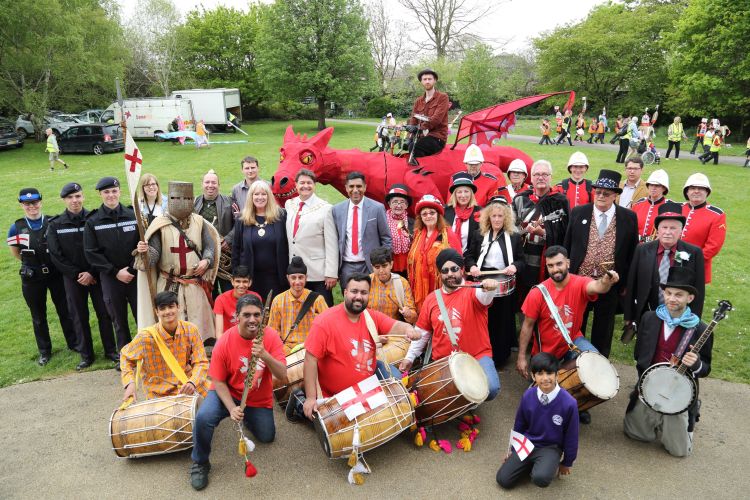 Dartford was abuzz with some of the biggest Saint George’s Day celebrations which took place on Tuesday 23rd April. 550 children from 9 local schools participated in the annual and took the opportunity to showcase the amazing art pieces they had been creating in the lead up to the event. The celebrations were organised in partnership by Kent Equality Cohesion Council and Cohesion Plus supported by Dartford Borough Council.

Performances took place on One Bell Corner and were followed by a parade led by North Kent resident Russell Palmer as Saint George himself. The parade began from the Civic Centre, went through the Orchard Shopping Centre, stopping briefly at Memorial Gardens where the flag of Saint George was raised. The celebrations climaxed at the Bandstand in Central Park where there followed a programme of entertainment which climaxed with the National Anthem.

Gurvinder Sandher, CEO of Kent Equality Cohesion Council commented “Given the challenging climate we find ourselves in recently, it is so heartening to see that the communities of the borough regardless of their ethnic, religious or social background continue to come out and support such a wonderful celebration. I truly believe that the spirit of the communities is reflected in events such as St George’s Day where we prefer to celebrate what brings us together rather than what divides us. We should take away a message of unity and strength from today’s event.”