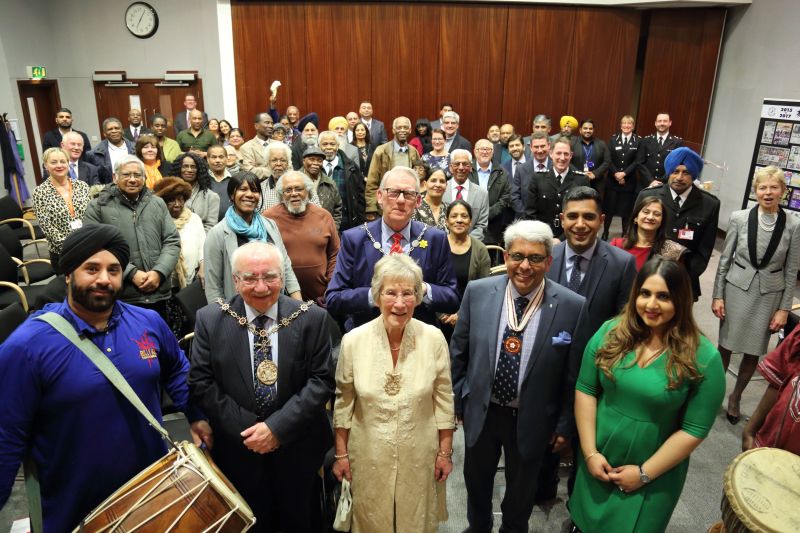 A special community event took place at the Civic Centre on Thursday March 15th to celebrate the Commonwealth and the positive contribution made in the borough by local residents who were born in Commonwealth countries. The event which was organised by Kent Equality Cohesion Council featured a number of guest speakers who highlighted the positive contribution the Commonwealth has made both locally and internationally. Speakers included the Mayor of Gravesham Cllr Harold Craske, Deputy Lord Lieutenant Dr Bhargwara Vasudaven, Cllr Gurjit Bains, Assistant Chief Constable Jo Shiner and Mr Prithipal Kang BEM from Kent Fire and Rescue Service. Entertainment was provided by Lucky Moyo and Bill Singh from Folkin Fusion Drumming Collective.

Those in attendance were also informed of plans for a big celebration taking place in Gravesham in October to commemorate the 70th anniversary of the SSE Windrush, which arrived in Tilbury in 1948 carrying passengers from the Caribbean who were invited by Britain to assist with post war reconstruction.

Two special community awards were also presented by Kent Equality Cohesion Council to Claudette Bramble and Devinder Singh Patara for their outstanding contribution in promoting positive community relations in Gravesham over many decades. Claudette was an active member of the Community Relations Council which was a forerunner to the Kent Equality Cohesion Council in the 1980’s and a founding member of the Gravesend West Indian Association. She is a former Chair of the North Kent Police Liaison Committee and Kent’s first female BAME magistrate. Claudette is still active in the community today with her work with the North Kent Caribbean Network. Devinder was one of the founding members of the Gravesend Kabbadi Club in the late 1960’s. Since then he has established a reputation nationally for his commitment and service to the sport of Kabbadi. He was also involved in football and the arts in Gravesham. In the 70’s and 80’s he was very active in promoting positive community relations including the publication of ‘Ekta – United We Stand Divided We Fall’ Magazine the first ethnic media available in Gravesham at the time. As well as being an active member of the Community Relations Council he also served in many different roles for the Guru Nanak Sports Club.

According to Gurvinder Sandher the CEO of Kent Equality Cohesion Council, “I was very humbled by the positive response we had to our Commonwealth celebration. I have always highlighted Gravesham as a beacon that other parts of the country could learn from in terms of cohesion, integration and the celebrating of shared values. It was an honor to present awards to two unsung heroes of the local community who have done so much over many decades to help contribute to the positive community relations that we enjoy here today in Gravesham”.