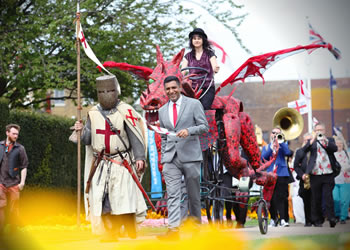 Dartford played host to some of the biggest celebrations in England to commemorate Saint George’s Day on Monday April 23rd. 500 Children from 8 local schools participated in the vibrant festivities which were organised by Cohesion Plus in partnership with Kent Equality Cohesion Council supported by Dartford Borough Council. The aim of the event was to celebrate the patron Saint of England and bring together the diverse communities in a large scale celebration.

The colourful parade started at the Civic Centre and made its way through the Orchard Shopping Centre accompanied by West Hill Morris, Premier Brass Band, Brass Volcanoes, Cohesion Plus’s Folkin Fusion Drumming and artistic partners LV21 and Same Sky. Once the parade reached the High Street they were joined by a large scale dragon and hundreds of local residents who then followed the parade to its climax in Central Park. .

The parade climaxed around the Band Stand in Central Park the 500 school children sang Happy Birthday to HM The Queen to celebrate her 92nd birthday. The festivities climaxed with a special rendition of Land of Hope and Glory performed by Premier Brass Band and the Folkin Fusion Drumming Collective.

Gurvinder Sandher CEO of Kent Equality Cohesion Council commented “The underlying work of KECC is to bring communities together to celebrate what it means to be British within today’s diverse society. Looking around us here today I think we have achieved that and I am extremely proud of what we have delivered. I passionately believe that events like Saint George’s Day should be celebrated as a means of bringing communities together and I am glad to see that Dartford embraces the festivities so completely.