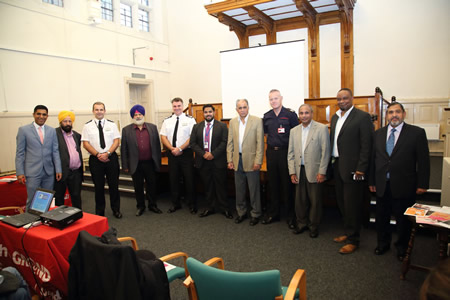 KECC had a positive response to a special Community Engagement Meeting which took place at the Grand Offices in King Street, Gravesend. Speakers at the event included Kent Police and Crime Commissioner Matthew Scott who spoke about his role and his request for feedback for his new Police and Crime Plan. Chief Constable Alan Pughsley who spoke about the positive work that Kent Police around engaging with diverse communities are doing and his commitment to keeping Kent a safe place to live and work in.

Gurvinder Sandher the CEO of Kent Equality Cohesion Council spoke about the Reaching Communities Project that KECC are involved with and how members of the local community could get free help and advice around issues such as immigration, debts and benefits.

The Assistant Director of Community Engagement Kent Fire and Rescue Martin Adams then spoke about the work that the Service was doing especially around supporting those who are elderly and vulnerable.

According to Gurvinder Sandher “I was really pleased with the meeting. There was a good representation from the local community and we were able to let people know what help and support is available locally, I was especially keen to speak about the Reaching Communities Project we are working with Citizens Advice on.”