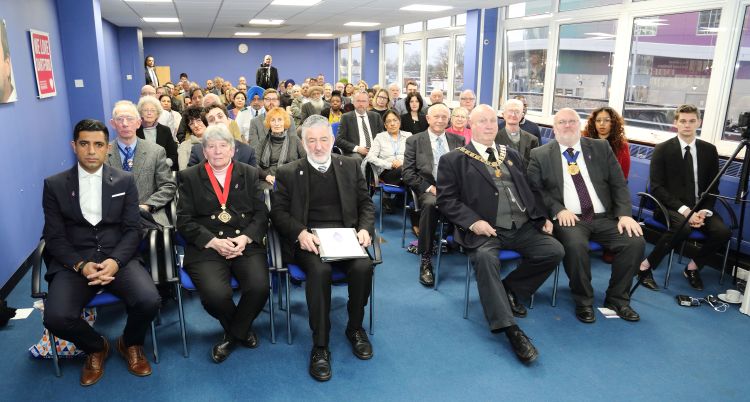 Communities and faith groups from Dartford came together on Monday 27th January to commemorate Holocaust Memorial Day which also marked the 75th anniversary of the liberation of Auschwitz and the 25th anniversary of the genocide in Bosnia. The event was organised by the Kent Equality Cohesion Council in partnership with Dartford Borough Council and saw a number of people attend including Dartford Borough Council Leader Jeremy Kite, The Worshipful Mayor of Dartford Cllr Roger Perfitt and Chairman of Kent County Council Cllr Ann Allen.

Attendees heard from a range of speakers including Gurvinder Sandher from the Kent Equality Cohesion Council who spoke about the importance of learning lessons from history. Gerald Rose from the Catford and Bromley Synagogue talked about the theme of this year’s Holocaust Memorial Day, ‘Standing Together’ and Dartford Council Leader Jeremy Kite spoke about his recent experience visiting Auschwitz Concentration Camp. The event concluded with an interfaith prayer which was led by Reverend Cantor David Rome.

Gurvinder Sandher the CEO of Kent Equality Cohesion Council commented, “I am very grateful to everyone who made the time to attend this event. It is imperative that we continue to come together regardless of background, faith and ethnicity to remember the wrong doings of the past and learn from them. It is vital that the same mistakes do not repeat themselves. Tragically, some lessons have to be repeatedly learnt with genocides still occurring to this day, most recently in Darfur. The atrocities that took place in Auschwitz, Bosnia and Rwanda are no less horrific now than they were back then and we must never forget them. ”

Dartford Borough Council Leader Jeremy Kite said, “Holocaust Memorial Day is a powerful reminder of how quickly civilisation can descend into chaos and hatred. Sadly this prospect is no less real in 2020 than in the 1930s and 40s. We need to unite and demonstrate that we stand together in building a more peaceful and tolerant world.”