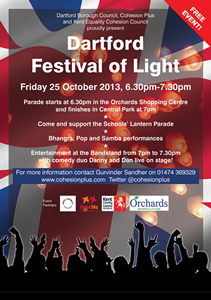 Preparations are underway for the fifth Dartford Festival of Light which will take place on Friday October 25. The first part of the event will feature a schools parade through Dartford Town Centre between 6.30pm and 7pm starting in the Orchards Shopping Centre before heading left onto the High Street to Dartford Central Park where it will climax at the Bandstand. The parade will involve 11 schools from Dartford who will be working with renowned arts company Samesky in the build up to the event. In total over 550 young pupils will benefit from arts workshops. The children will make lanterns and torches which they will carry in the parade.

The second part will feature Kent based Comedy Duo Danny and Dan performing at the Bandstand in Central Park between 7pm and 7.30pm.

The Festival of Light has been organised by local arts organisation Cohesion Plus in partnership with Kent Equality Cohesion Council with the support of Dartford Borough Council and Kent County Council.

According to Gurvinder Sandher the CEO of the Kent Equality Cohesion Council who is co-ordinating the event “The whole purpose of the event is to celebrate the positive community relations enjoyed in the borough and to showcase some of the fantastic work being done by young people in their schools around the arts. I am delighted that we have had an excellent response from the local schools again and I hope the community of Dartford will come out and support the young people taking part in this colourful event. As ever I appreciate the on-going support of Dartford Borough Council for all their support in the build-up to this event.”