Preparations are underway for the sixth Dartford Festival of Light which will take place on Friday October 24. The event this year proves to be the biggest to date with a longer route and some exciting entertainment at the end for the local community to enjoy.

The Festival of Light has been organised by local arts group Cohesion Plus in partnership with Kent Equality Cohesion Council with the support of Dartford Borough Council and Arts Council England.

The first part of the event is a schools parade through Dartford Town Centre between 6.30pm and 7pm. The parade featuring 10 local schools and some 500 children who will all have made lanterns especially for the event will start on One Bell Corner on the High Street. It will then go via Hythe Street, the Orchard Shopping Centre and Market Street to Central Park where it will climax by the Band Stand. In addition to the children the parade will feature Crocodile Brass, Four by Four Dhol Drummers and Bloco Fogo Samba. The parade will be led by the Mayor of Dartford Cllr Avtar Sandhu MBE and the Leader of Dartford Borough Council Cllr Jeremy Kite.

Once everyone is at the Band Stand there is a free programme of entertainment between 7pm and 8.30pm which will feature Steel Ambition, vocalist Ryan Bennett, Bloco Fogo Samba, Crocodile Brass and Four by Four Dhol Drummers.

According to Gurvinder Sandher the CEO of the Kent Equality Cohesion Council who is co-ordinating the event “I hope that the local community will come out and support the Dartford Festival of Light. The whole purpose of the event is to bring the whole community together and celebrate important values such as friendship, respect, determination and excellence and to showcase the positive community relations enjoyed in the borough. I very much appreciate all the support that Dartford Borough Council has provided in the build up to the Festival.” 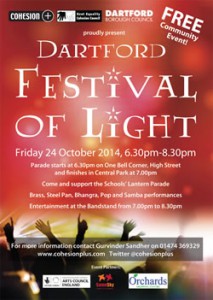 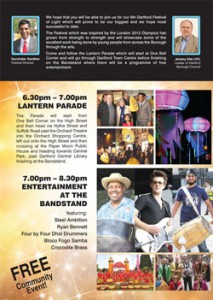