Preparations are underway for the fourth Dartford Festival of Light which will take place on Friday October 19. The first part of the event will feature a schools parade through Dartford Town Centre between 7pm and 7.45pm. The parade will involve 11 schools from Dartford who will be working with renowned arts company Samesky in the build up to the event. In total over 500 young pupils will benefit from arts workshops. The children will make lanterns and torches which they will carry in the parade. The second part will feature a free concert by leading tribute act Jessie Jay and DJ Stan Lee King at the Bandstand in Central Park between 8pm and 8.45pm.

The Festival of Light has been organised by Cohesion Plus in partnership with Kent Equality Cohesion Council with the support of Dartford Borough Council, Arts Council England and Kent County Council. 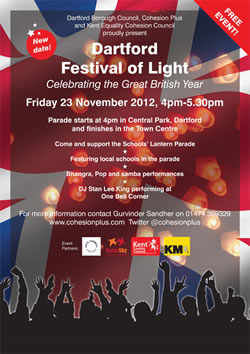 The theme of the event will be to celebrate our Great British Year which has included the Diamond Jubilee, Olympics, and the Paralympics and the British values of respect, excellence, friendship and equality. This year in addition to the parade and concert there will a spectacular light show at the Sky Dome in Central Park.

According to Gurvinder Sandher the Director of the Kent Equality Cohesion Council who is co-ordinating the event “We have had a great British year and I hope that the community of Dartford will come out and support this celebration and bring along their union flags and wave with pride. It was great to see so many people in the summer through the Diamond Jubilee and the Olympics celebrating what it means to be British and we hope locally we can do this through the Festival of Light. I am really pleased with the support being provided by our partners Dartford Borough Council, Arts Council England and Kent County Council.”