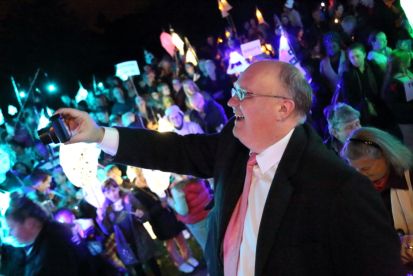 Preparations are well underway for the Dartford Festival of Light which will take place on Friday October 23 between 6pm and 8pm. Organised by leading arts organisation Cohesion Plus in partnership with Kent Equality Cohesion Council with the support of Dartford Borough Council and Arts Council England the Festival is now in its 7th year. The aim of the Festival is to bring the communities of Dartford together through the arts and promote key values of respect, excellence, friendship and equality.

The Festival this year is the biggest to date and is split into 3 distinct parts. Between 6pm and 6.30pm there will be entertainment on One Bell Corner as local vocalist Mark Lees sings some popular chart tunes.

11 local schools will then take part in a lantern parade starting around 6.30pm involving some 550 young people which will also involve the Four by Four Dhol Drummers, Crocodile Brass, Same Sky Arts and Stilt Walkers. The parade will be led by the Mayor of Dartford Cllr Ian Armitt and the Leader of Dartford Borough Council Jeremy Kite MBE and will start on One Bell Corner in the High Street. It will then go via Hythe Street, the Orchard Shopping Centre and Market Street to Central Park where it will climax by the Band Stand.

Once the Festival reaches Central Park after a series of short performances and presentations there will be a spectacular fireworks display to climax the celebrations delivered by the awards winning Phoenix Fireworks.

According to Gurvinder Sandher the CEO of the Kent Equality Cohesion Council who is co-ordinating the event “I am really pleased with the positive response that we have had to date for the Dartford Festival of Light. It is a great showcase of how the arts can be used to bring communities together and a perfect showcase for Dartford Town Centre and builds upon the success of our Saint George’s Day celebrations and High Street Carnival. We have also added a firework element this year which we hope will prove popular.” 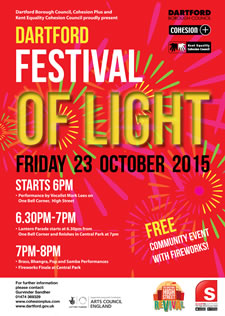