There will be lots of colour and noise coming to Dartford on July 10 as the first ever Dartford High Street Carnival of Summer organised by Cohesion Plus in partnership with Kent Equality Cohesion Council and Dartford Borough Council with the support of Arts Council England takes place. The Carnival will feature 4 local schools and some 250 children who have been working with leading carnival company The Great British Carnival who delivered workshops in the build-up to the event.

The aim of the Carnival is to celebrate the rich heritage of Dartford, to celebrate the High Street and the positive community relations in the borough and provide an opportunity for children to learn new skills around costume and prop making.

There will be entertainment on One Bell corner between 12.30pm and 1.30pm which will include performances by Steel Ambition and Rhythm of the City Samba. The Carnival parade will start at the Band Stand in Central Park at around 1.35pm and will then head towards the High Street going past One Bell Corner before heading back to Central Park. Once back at Central Park the Mayor of Dartford Councillor Ian Armitt along with the Leader of Dartford Borough Council Councillor Jeremy Kite and representatives from the Kent Equality Cohesion Council will make a presentation of medals to the pupils taking part in the Carnival.

According to Gurvinder Sandher the CEO of KECC “We are delighted to be involved with the Dartford High Street Carnival of Summer and believe it fits in really well with our other events in the borough namely the Saint George’s Day celebrations and the Dartford Festival of Light. I am very grateful for the on-going support of Dartford Borough Council who like us want to celebrate not only the positive community relations enjoyed in the borough but also the positive impact that the High Street has on the residents of Dartford.” 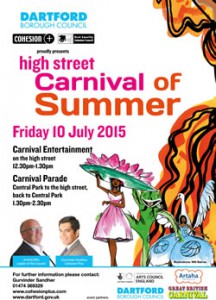