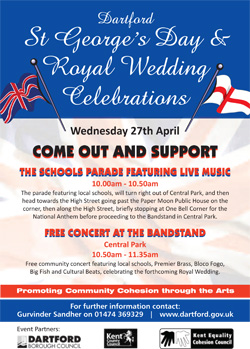 Kent Equality Cohesion Council in partnership with Dartford Borough Council and with the support of Kent County Council have organised the Dartford Saint George’s Day & Royal Wedding Celebrations which will take place on Wednesday April 27th. 450 pupils from 7 local schools will be taking part in the parade which starts at 10am. The procession will turn right out of Central Park, and then head towards the High Street going past the Paper Moon Public House on the Corner, then along the High Street, briefly stopping at One Bell Corner for the National Anthem before proceeding to the Bandstand in Central Park. There will be a short concert at the bandstand with performances by Premier Brass, Big Fish, Cultural Beats, Bloco Fogo Samba and local schools. In addition there will be a presentation for each school taking part. According to Gurvinder Sandher the Director of Kent Equality Cohesion Council “I have been greatly enthused by the support provided by local schools and partners for this event. A lot of time and effort has gone into pulling this event together and I hope that the community of Dartford will come out and support the parade and the celebrations.”