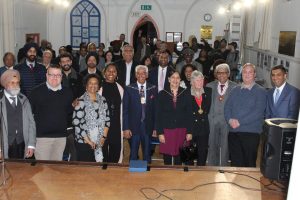 A special community event took place in Gravesham at Saint Andrew’s Arts Centre on Tuesday 10th March to celebrate the Commonwealth and the positive contribution made in the borough by local residents with links to Commonwealth countries. This event was part of Commonwealth Day celebrations which took place around the globe.

The event was organised by the Kent Equality Cohesion Council in partnership with Cohesion Plus and the North Kent Caribbean Network. The evening saw performances from Phase 5 Steel Band and the GTown Collective, a group of young grime rappers from the borough. Speakers included Gurvinder Sandher from the Kent Equality Cohesion Council who spoke about the key role that the Commonwealth has played in British history including the positive contribution made by soldiers during the two World Wars. Michelle Bramble, the Chair of the North Kent Caribbean Network spoke about the Windrush generation and how their contribution towards the rebuilding of the UK after the Second World War should never be forgotten.

Furthermore, a special award of recognition was presented to Alberta Theresa Jaggon, the widow of Cllr Joseph Jaggon a former Mayor of Gravesham. The award recognised both Mr and Mrs Jaggon’s contributions to the promotion of positive community relations in the borough over the many years.

Gurvinder Sandher the CEO of Kent Equality Cohesion Council commented, “In today’s social climate I believe it is vital to take a moment to reflect on and celebrate the vast diversity of Gravesham as well as listen to the many stories of those individuals who made their way to the UK from Commonwealth countries like Jamaica and India in the 1940’s. Those stories tell of great challenges and struggles and serve as a valuable foundation to the positive community relations we enjoy today.”

Michelle Bramble, Chair of the North Kent Caribbean Network commented, “I am incredibly grateful to everyone who attended this event, especially the communities that hail from the many Commonwealth countries. Events like this are important, where different generations come together to remember and celebrate our shared histories.”