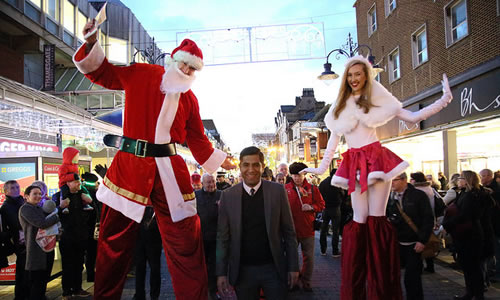 Kent Equality Cohesion Council has been working in partnership with Cohesion Plus and Gravesham Borough Council on the Gravesham Festival of Lights which will take place on Friday November 18th between 4pm and 6pm.

The town centre event will be kicking off from 4pm. Crowds can expect street entertainers including Christmas Mime Elves, Santa and his helpers on stilts, Bloco Fogo Samba, Crocodile Christmas Brass Band and much more.

At 5pm there will then be a parade through the town before the lights are switched on. This will feature 11 local schools and some 500 young people from across the borough, along with the bands and performers. The schools have been working with Same Sky Arts on Christmas Lanterns which they will showcase during the parade.

The procession will set off from St George’s Centre and travel through New Road, up Windmill Street and culminate on Community Square.

From 5.30pm, at Community Square, the lights will officially be switched on by the Mayor and there will be half an hour of entertainment. This will include a Jack and the Beanstalk panto stage area, where the cast of this year’s show will amuse crowds.

According to Gurvinder Sandher the CEO of Kent Equality Cohesion Council “We believe that it is important for communities to come together and celebrate shared values. Our Christmas celebrations follow our Saint George’s Day celebrations in April and the celebrations for HM Queen’s 90th birthday in June. I am delighted that so many young people will be taking part in the parade and we look forward to bringing the town centre to a halt with a combination of music, dance, lights and the diverse communities of the borough.” 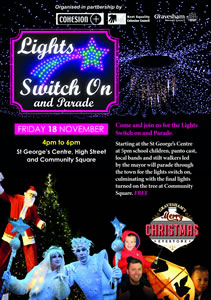 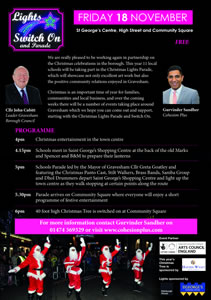