Dartford Town Centre was brought to a standstill on Friday November 23 as around 500 people took part in the fourth Dartford Festival of Light which was organised in partnership by Kent Equality Cohesion Council, Cohesion Plus and Dartford Borough Council. The parade involved 9 schools from Dartford along with their parents and members of the public who joined in as the parade went around. The children had been working hard in the preparation for the festival making lanterns and torches which they carried in the parade. In total around 400 children benefited from workshops in the build-up to the event.

The aim of the Festival of Light was to bring the communities of Dartford together through the arts, and was inspired by the Great British Year which included the Diamond Jubilee, the Olympics and the Paralympics. Union Flags were given out during the parade and many people waved them with pride as the children walked by with their lanterns.

The parade which along with the schools also featured Bloco Fogo Samba Group and the Four by Four Bhangra Dhol Drummers started on the green outside Central Library, it then went onto the High Street, before finishing at One Bell Corner where the National Anthem was played before the participants were thanked by the Mayor of Dartford Cllr Ann Allen and event organiser Gurvinder Sandher the CEO of Kent Equality Cohesion Council. All schools were then presented with trophies which were presented by guests from Dartford Borough Council, Kent Police and Kent Fire Rescue Service.

According to Gurvinder Sandher the CEO of Kent Equality Cohesion Council who led on the organisation of the Festival “Having had to cancel the original date in October due to bad weather I was really proud that we were able to not only re-arrange the event but that we were able to put on such a spectacular event which was enjoyed by all who took part. The theme of the festival was to celebrate the great British Year and we hope that the young people who took part will remember this for many years to come. I was pleased that people waved the union flags which we gave out as the parade walked by as I believe it is important that we use events like this to celebrate what it means to be British. Great credit also needs to be given to our partners Dartford Borough Council whose help and support enabled the event to be the success it was.” 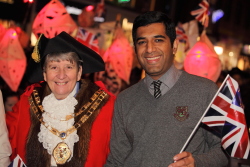 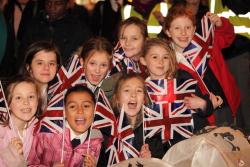 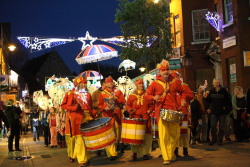