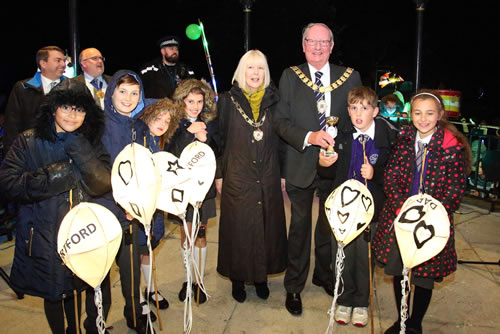 Lights, music and fireworks were the order of the day at the 8th Dartford Festival of Light took place on Friday October 21. Organised by Cohesion Plus in partnership with Kent Equality Cohesion Council with the support of Dartford Borough Council, KCC Members Fund and Arts Council England, the aim of the Festival was to bring the communities of Dartford together through the arts and promote key values of respect, excellence, friendship and equality

12 local schools and some 650 children who benefited from free creative arts workshops then took part in a lantern parade led by the Mayor of Dartford John Burrell, KECC CEO Gurvinder Sandher, Gareth Johnson MP and the Leader of Dartford Borough Council Jeremy Kite MBE. The parade started in the High Street and then went via Hythe Street, the Orchard Shopping Centre and Market Street to Central Park where it climaxed by the Band Stand.

Once the Festival reached Central Park after a series of short performances and presentations to the schools, the evening climaxed with a spectacular fireworks and lights display to climax the celebrations delivered by the awards winning Phoenix Fireworks.

According to Gurvinder Sandher the CEO of KECC, “We are really proud of what we were able to achieve in Dartford this year. Great credit needs to go to our partners for their ongoing support and their confidence in our work. We are very much committed to using events like this and St George’s Day to promote community cohesion and bring the diverse communities of Dartford together as one. It was so good both young and old, schools from urban and rural parts of the borough participating and enjoying themselves.”

Lights, music and fireworks were the order of the day at the 8th Dartford Festival of Light took place on Friday October 21. Organised by Cohesion Plus