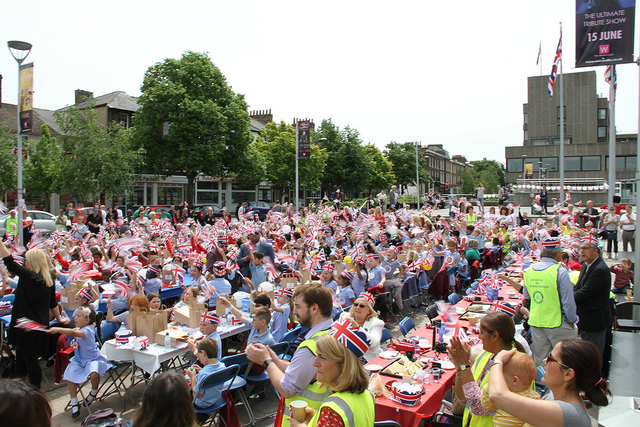 Birthday cake and bright skies was the order of the day as Gravesham celebrated the 90th Birthday of Her Majesty the Queen. Cohesion Plus, working with Gravesham Borough Council and Kent Equality Cohesion Council organised a special street party on the Community Square on Friday June 10 which was attended by over 400 people. They were entertained by Elton John and One Direction tribute acts while enjoying specially prepared packed lunches sitting in the sun.

This was followed on Saturday June 11 by the fourth Gravesham Fusion Festival at the Fort Gardens. The theme was Britain and the Commonwealth and was headlined by leading Queen Tribute act Real Magic. They were supported by local Kent based acts including Four by Four Bhangra, Phase 5 Steel Band, Uzambezi, Gemma Moore, Confident Queen Genny Jones, Chuckle Singh’s and Shadow of Doubt.

In addition to the stage programme Same Sky Arts delivered creative arts workshops for young people who made union flags and crowns.

Gurvinder Sandher the CEO of Kent Equality Cohesion Council commented “I was really pleased that the weather held out and we were able to be involved in 2 great community celebrations to mark Her Majesty the Queen’s 90th birthday. She has been a beacon for this nation since her coronation in 1953 and we can all learn from her commitment to public service. I have had some real positive feedback and hope that we created some great memories for the young people who were able to take part in the celebrations.”