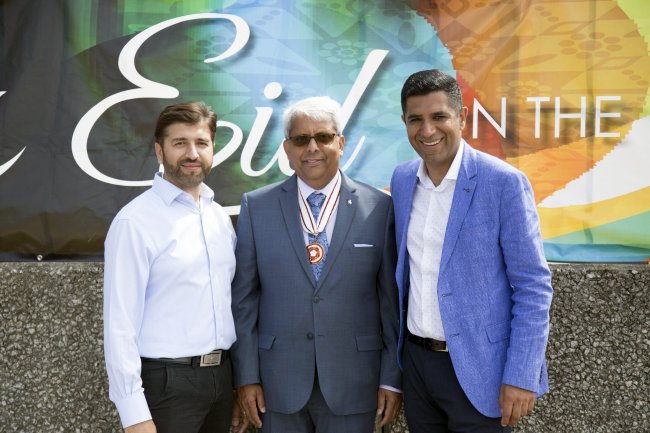 Around 500 people attended celebrations on Community Square on Saturday June 23 to commemorate the Festival of Eid, one of the most important dates in the Muslim calendar. Eid marks the end of Ramadan when people from the Muslim faith fast from dawn to sunset.

The celebrations involved the raising of a flag celebrating the Festival of Eid, musical entertainment, fun fair, face painting and the handing out of free food to not only those in attendance but also members of the public passing by.

According to Gurvinder Sandher the CEO of Kent Equality Cohesion Council “I was pleased with the positive response that the Eid Festival received not only from members of the public who attended but also the many partner agencies. To me the Eid Celebrations were like the other events we organise such as Saint George’s Day, it was an opportunity for the communities of Gravesham to come together and celebrate our shared values regardless of faith or if you had no faith at all.”

Ejaz Aslam the Chair of the Gravesend and Dartford Muslim Association commented “We had an excellent turnout to the celebrations. This is what makes Gravesham so unique. It was a joy to see people from different backgrounds and faiths stand together enjoying the festivities.”