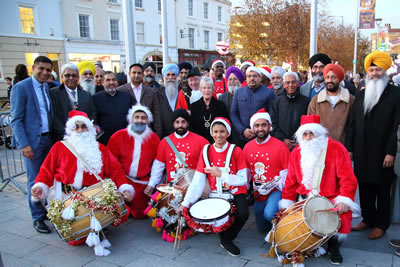 Some 1500 people participated in the Gravesham Festival of Christmas Lights on Friday 17th November which incorporated the switching on the town’s Christmas Lights. The celebrations were organised by Cohesion Plus working in partnership with Kent Equality Cohesion Council and Gravesham Borough Council supported by Arts Council England.

10 local schools took part in a lantern parade led by the Mayor of Gravesham, Councillor Harold Craske along with representatives from various faith and community organisations as well as street entertainers Bloco Fogo Samba, Brass Volcanoes, the Drumming Santa’s and the Black Knights. All the schools worked with Same Sky in the build up to the parade to create special lanterns which were showcased during the event.

The parade started at Community Square and then travelled down Windmill Street, New Road, through the St Georges Shopping Centre before finishing at Gravesham Borough Market. The Christmas Lights were switched on in the Town Centre as the parade passed by.

The climax of the celebrations took place in the Gravesham Borough Market where the Cohesion Plus produced “Drumming Santa’s” performed bringing a unique fusion of Christmas tunes to Bhangra and African drumming to entertain and wow the crowds. This was followed by a series of performances which included starts of this year’s pantomime Sleeping Beauty.

Gurvinder Sandher the CEO of Kent Equality Cohesion Council commented: “This was one of our biggest Christmas celebrations to date in Gravesham. I am very grateful to all the local schools and our partners who made our celebrations such a success. It is important that celebrations like Christmas are used as opportunities to bring communities together and celebrate all that binds us together regardless of faith.