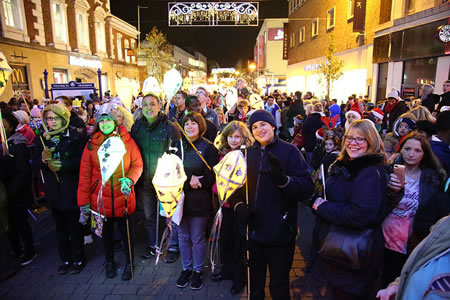 The annual Festival of Christmas Lights will be taking place on Friday November 17th. Kent Equality Cohesion Council working in partnership with Cohesion Plus and Gravesham Borough Council have been working on this project for the last few months.

The town centre event will be kicking off from 3.45pm. Crowds can expect street entertainers including a Jack Frost themed mime artist, Santa and his helpers on stilts, Bloco Fogo Samba, Brass Volcanoes and the Drumming Santa’s.

Around 500 school children from 10 local schools will then take part in a lantern parade led by the Mayor of Gravesham Councillor Harold Craske, which will start at Community Square at 4.30pm with the switching on of the Christmas tree lights. The schools have been working with Same Sky Arts on Christmas Lanterns which they will showcase during the parade.

The parade will then go via Windmill Street, New Road, through the St Georges Shopping Centre before finishing at Gravesham Borough Market. The Christmas Lights will be switched on in the Town Centre as the parade passes. The celebrations will climax with a series of performances including the stars of this year’s pantomime Sleeping Beauty and the Drumming Santa’s.

Gurvinder Sandher the CEO of Kent Equality Cohesion Council commented “Christmas is an important time of year; it is a time for reflection and for sharing goodwill. Events like this bring the diverse communities of the borough together to celebrate our shared values and all that connects us. We hope that the residents will come out and support the spectacular parade which will go through the Town Centre. 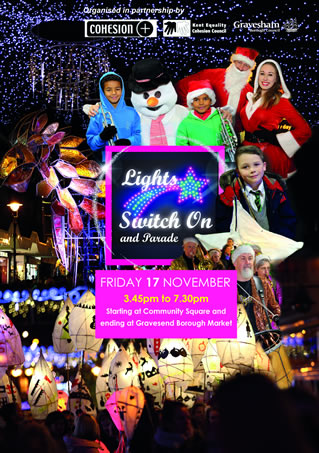 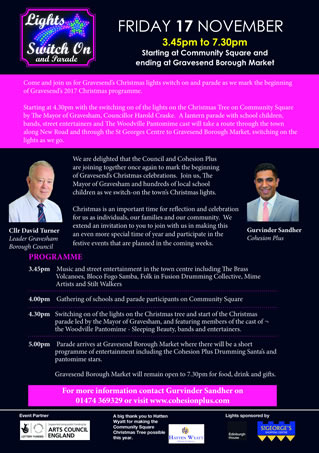