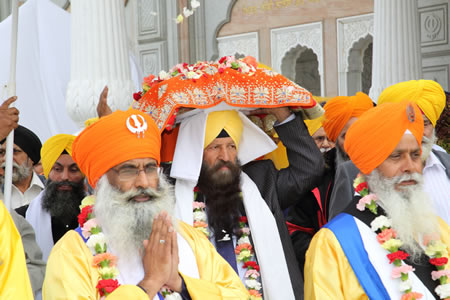 Thousands took part in the annual Sikh festival of Vaisakhi in Gravesham over the Easter weekend with people coming from all over Kent to participate. Vaisakhi commemorates the 10th Guru of the Sikhs, Guru Gobind Singh Ji’s formation of the Khalsa Panth in 1699 (the community of committed Sikhs) which created the faith as it is practised today.

The celebrations were launched on Thursday with a special service on the Community Square where the Sikh flag was raised by the President of the Guru Nanak Darbar Gurdwara Davinder Singh Bains. This was followed by a programme of hymns, Gatka (Sikh Martial Arts) and Bhangra Dancing before donations of food and drink were given out to passers-by and members of the local congregation.

The centrepiece of the celebrations took place on Easter Saturday with the Nagar Kirtan procession (nagger means town and kirtan means the singing of hymns from the Guru Granth Sahib, the Sikh holy book) taking place. The procession started on the grounds of the Guru Nanak Darbar Gurdwara where those in attendance heard at the start from special guests including the Mayor of Gravesham Cllr Goatley, Adam Holloway MP, Police and Crime Commissioner Mathew Scott and Deputy Lord Lieutenant Dr Bhargawa Vasudaven. Then led by the Panj Piare (five beloved of the Guru) the procession went through the Town Centre where it was well received by members of the public who stopped to see the colourful spectacle and enjoyed free donations (seva) of food and drink as the procession passed. Following a short stop for prayers at the Guru Ravidass Gurdwara in Brandon Street the procession headed back to the Guru Nanak Darbar Gurdwara. In addition to the thousands who walked in the Nagar Kirtan there were a number of community floats and groups taking part including Lethal Soundz, Guru Nanak Punjabi School, Kent Kirtan Society, Punjab United Football Club, Four by Four Bhangra, Jugnu Bhangra, Guru Nanak Sports Club and Guru Nanak Football Club.

Once the prayers had been said thousands joined in on the celebrations on the sports field where there was information stands from partners including Kent Police, Rethink Mental Illness, Kent Fire and Rescue Service and local community projects, a fun fair, Sikh martial arts and dozens of stalls giving out free food and drink to those in attendance. Award winning International Bhangra and Folk Star Sukshinder Shinda performed a special set of religious songs to bring the day to an exciting climax.

The celebrations concluded on the Sunday at the Gurdwara where prayers were read and donations made for the up keep of the running of the Gurdwara. The special guest of honour was the High Commissioner of India His Excellency Y.K. Sinha.

Gurvinder Sandher the CEO of Kent Equality Cohesion Council who has been working with the Guru Nanak Darbar Management Committee to organise the festivities said “Vaisakhi is a great example of how volunteers from across the community can come together to organise a community celebration which is enjoyed by thousands. I am very grateful to all the volunteers who have given up their time freely over the past few months to work with me on pulling the Vaisakhi celebrations together. I am also grateful to key partners such as Gravesham Borough Council and Kent Police for their advice and support in the build-up, event like Vaisakhi can only take place by working in partnership.”