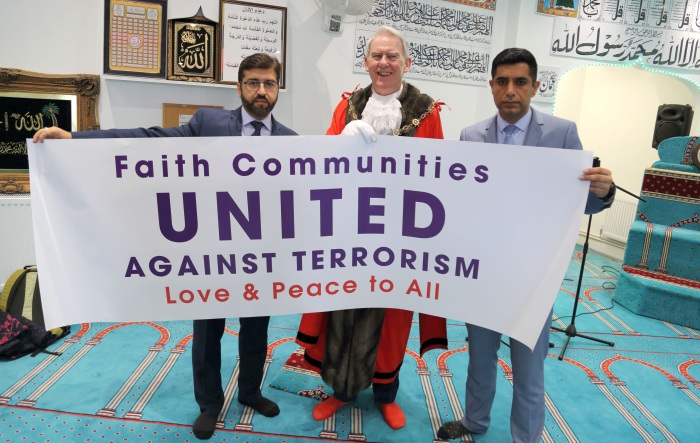 Faith and community organisations came together on Wednesday March 20th to condemn the recent attack in Christchurch, New Zealand and share a message of unity and solidarity. The event, which took place at the Gravesend & Dartford Muslim Association Mosque & Cultural Centre in Gravesham hosted around 100 people and was the first opportunity for local faith and community groups to come together to strongly condemn the attack.

Gurvinder Sandher CEO of Kent Equality Cohesion Council said, “Following the recent terrorist incident in New Zealand I felt it was important that communities and faith groups came together in an act of solidarity. Terrorists of whatever persuasion are seeking to divide communities around the world so it is vital that we take a stand in the most strongest terms and show those that seek to divide us that, regardless of faith or background we will stand together as one.”

According to the Chairman of the Gravesend and Dartford Muslim Association Ejaz Aslam, “It is heartbreaking to be in a position once again in sending our thoughts and prayers to those involved in such a horrific attack. Whether it is on the other side of the world or right here in our own communities, the pain caused by such attacks is felt by all of us just the same. I am very grateful for the solidarity shown by other faith organisations and community partners at this most difficult time. In such trying times it is heartening to know that we have a support system that transcends race, religion and background.”

Mayor of Gravesham Cllr David Hurley said: “On behalf of Gravesham, I send our deepest condolences, support and prayers to all the citizens of Christchurch. We stand shoulder-to shoulder with everybody in Christchurch. Those who have suffered loss of family and friends; those who are still suffering from injuries; those of the emergency services who have to deal with these terrible and evil atrocities on our behalf; but most of all, we remember all those who died in this senseless and violent act. Today’s gathering of all faiths is testament to the strong community that we have in Gravesham and we stood today to show that such evil atrocities will not be victorious.”