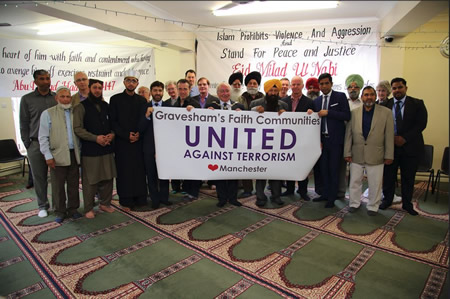 Gurvinder Sandher said, “My thoughts and prayers go out to the families and loved ones of all those affected by the attack in Manchester. It is clear that terrorists are looking to cause division and tension within communities. This is why I felt it was important that here in Gravesham, a place where we have always prided ourselves on our positive community relations, we took a stand not only to condemn the recent attack in Manchester in the most strongest terms but also an opportunity to show those that seek to divide us that, regardless of faith or background we stand together as one.”

According to Chairman Ejaz Aslam, “I am very upset by the recent atrocity that took place in Manchester. It was heartbreaking to hear of the loss of innocent young lives, that could have been my daughter or wife. These terrorists do not discriminate in who they target or kill. They want to cause discord and do not represent in any way Islam, my faith or the teachings of the Quran. I am grateful to all those who attended today and stood shoulder to shoulder with the Muslim community to condemn this attack and we look forward to continuing this valuable inter faith dialogue for the benefit of all communities.”

Mayor of Gravesham Cllr Harold Craske said: “The event at the Mosque today was very moving. Listening to the speakers from some of the different faiths that we have here in Gravesham was both reassuring and positive. The attacks in Manchester and other recent terror incidents around the world are heart breaking and today was a shining example of how a community should stand together as brothers and sisters against terrorism. My thoughts and prayers go out to everyone that has lost a loved one or has been affected by these unnecessary attacks.”