The Sadi Awaz Suno (Listen to our Voices) conference which took place on March 15 and was organised in partnership with Rethink Mental Illness proved to be a great success.

The aim of the event was to explore important issues which are not often discussed openly including domestic violence, forced marriages and honour based crime. The audience of around 250 women was addressed by the Kent Police Crime Commissioner Ann Barnes who spoke about her new role and her determination to work for the communities of Kent. She was followed by Shereen Williams and Saeeda Chowdhry from the Henna Foundation a Charity based in Wales which supports victims of forced marriage and honour related violence. They spoke about the impact these crimes can have and talked about some of the cases that they had been involved with. 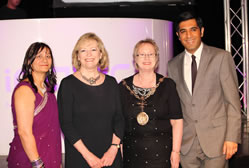 Following the key note speakers there was a panel session which was chaired by the CEO of Kent Equality Cohesion Council Gurvinder Sandher and which had Kent Police, Rethink Mental Illness and the Henna Foundation on it. One the key messages coming out of the panel was the fact that there was support available locally and that if anyone needed any help or support they should not hesitate to ask for it.

Gurvinder Sandher the CEO of the Kent Equality Cohesion Council commented after the event “The conference was very powerful and emotional; to hear stories about how life’s have been destroyed because of so called honour is very disturbing. The purpose of the event was to raise awareness of these issues and we hope that as a result that those in attendance understand better what help and support is available if required. We are also very grateful for the support provided by our partners including Rethink Mental Illness, Kent Police and Awards for All in helping make this conference possible”