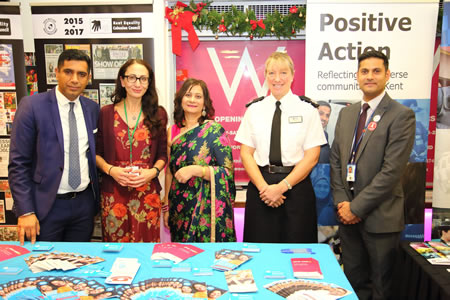 The annual Sadi Awaz Suno (Listen to our Voices) conference took place on Friday November 24th at the Woodville in Gravesend. The aim of the women only event was to explore important issues which are not often discussed openly including mental health, on-line grooming, child disability, well-being and domestic abuse.

The audience of around 300 were addressed by Assistant Chief Constable Jo Shiner from Kent Police who spoke about the work done around supporting victims of domestic abuse while Parmi Dheensa from Include Me Too spoke about child disability and how communities from the Indian Sub-continent deal with it. Local GP, Dr Manpinder Sahota spoke about well-being and mental health and how communities can help themselves and key note speakers Shahien Taj MBE from the Henna Foundation and Yasminara Khan from the BBC spoke about honour based crime and on-line grooming.

The key message coming out of the event was the fact that there was support available locally and that if anyone needed any help or support they should not hesitate to ask for it.

Gurvinder Sandher the CEO of the Kent Equality Cohesion Council commented after the event “It is important that events like this take place so that there can be an open and informed discussion around issues such as mental health, domestic abuse, on-line grooming and honour based crime which we know affect members of the local community. Sometimes people do not know who to turn to for help and support and that is why we hold this event.

According to Carol Gosal Rethink Mental Illness Service Manager for Kent “It is important that we all work together, communities, the authorities and local charities to raise awareness and provide support those who are experiencing issues relating to mental health and domestic abuse. Events like this are a step towards this and we look forward to working with our partners to make more positive strides over the coming months.”

The event was part funded by the Home Office VAWG (Violence and Against Women and Girls) Transformation Fund through the Altogether Safer Partnership which is led by Gravesham Borough Council and includes Kent Equality Cohesion Council, Rethink, Dartford Borough Council, Kent Police and Choices.