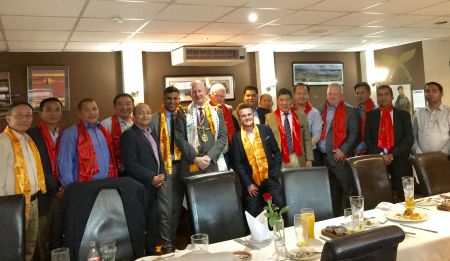 £270.00 was raised for the Maidstone Community Mela at a fundraiser which took place at the Gurkha Kitchen Restaurant on May 21st and was attended by the new Mayor of Maidstone Cllr David Naghi. This will be added to the £318.00 which was raised through a Crowd Funder Appeal. Further funding has been secured through Awards for All, KCC Members Fund and Golding Homes. The Community Mela is being organised by Kent Equality Cohesion Council and Cohesion Plus with the support of the Maidstone Mela Community Advisory Group and will take place on July 22 in Whatman Park.

Gurvinder Sandher who is Artistic Director for the Community Mela commented “We are very grateful to everyone who has supported the Community Mela. It has been a major challenge to raise the funds this year but we are nearly there now. I have been humbled by the support shown by local community partners which has given us the encouragement and belief to carry on when things were getting difficult. We look forward to welcoming the community of Maidstone to the Mela on July 22 in Whatman Park.”