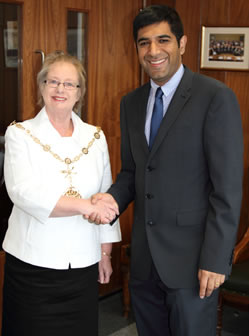 The Gravesham Mayor’s Curry Night which the KECC played a key role in organising which took place on Friday November 9 at the Woodville Halls proved to be a great success with over £1600 pledged to the Mayor’s Charity Fund on the night through an auction, raffle ticket sales and donations. The Mayors two principle charities are the Ellenor Lions Hospice in Northfleet and the Altzheimer’s and Dementia Support Services in Gravesham.

Cllr Lyn Milner the Mayor of Gravesham commented “I was overwhelmed with the great support that the curry night received. We have raised some vital funds for local causes and I would like to thank everyone who came and supported the evening and those who donated auction and raffle prizes.”

Local business man Shinde Bains from A1 Construction made a donation of £500 on the night while the auction raised over £850 including a successful bid of £500 for a cricket shirt signed by Indian and Kent players by Tejwant Chattha from Prestige Motors.

Gurvinder Sandher the CEO of Kent Equality Cohesion Council who helped organise the Curry Night on behalf of the Mayor of Gravesham commented “A lot of hard work went into organising the event so it was very pleasing to see how much we were able to raise on the night. Great credit needs to go the local businesses who supported the event through donations of prizes and pledges of money. I feel it is a great testament to the high regard that our Mayor Lyn Milner is held that so many people came out and supported this event.”