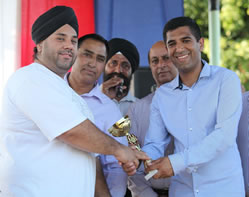 The Gravesend Community Mela Festival took place on Saturday August 18 at the Bandstand in the Fort Gardens, Promenade alongside the New Shrimpers Regatta. Around 1000 people attended the free community event on one of the hottest days of the year. The event was officially launched by the Mayor of Gravesham Cllr Lyn Milner.

The Mela which was organised by Cohesion Plus in partnership with Kent Equality Cohesion Council showcased a number of new emerging urban fusion artists including Sunny G Productions and Jai Khan, alongside up and coming bhangra stars Raju Dinehwala and Benny Dhaliwal who both are based in North Kent.

The event was headlined by bhangra superstar Jazzy B who is known as the Crown Prince of Bhangra. A special presentation was made to him by Gurvinder Sandher the Director of the Kent Equality Cohesion Council for his outstanding work to promote community cohesion and bringing communities together through music. Jazzy B received a great response from the crowd, with people dancing and singing along during his performance.

In addition KECC also made presentation to some of its partners who had supported the Mela including Cllr Tanmanjeet Singh Dhesi of Gravesham Borough Council, Cllr Avtar Sandhu MBE Deputy Cabinet Member at Kent County Council, Pirthipal Kang of Kent Fire and Rescue Service, Inspector Tony Ramskill of Kent Police and members of the GNG Gravesend Kabbadi Club.

Gurvinder Sandher the Director of Kent Equality Cohesion Council said “The Mela went very well. I would like to thank all our partners within the local community for their help and support for making the Mela happen after it was called off in July due to bad weather. The artistic quality was again very high, and the feedback that I have received from people as they have left has been positive. Our next event to celebrate the climax of the Paralympics will be on September 7 and I hope the local community will come out and support that as well.”