Kent Equality Cohesion Council in partnership with the Kent Integrated Youth Service organised a successful One Game, One Community Football Festival which took place at the Northfleet Youth Centre on Tuesday November 20.

Over 100 attended the event which included a football tournament which was run by the Charlton Athletic Positive Futures Team, this was followed by a series of educational talks from partners including the Mayor of Gravesham Lyn Milner, Cllr Tanmanjeet Dhesi, Troy Townsend from the campaign Kick it Out and Chief Inspector Philip Painter from Kent Police who all spoke about how football can be used to bring communities together. Other guests included former Professional Footballer and FA Cup Winner in 1973 David Young who is a resident of Gravesham, who brought along his winners medal to show the young people.

Gurvinder Sandher the CEO of the Kent Equality Cohesion Council commented “It was pleasing to see so many young people from diverse communities coming together through football, playing the game and learning side by side about social issues. KECC is committed to working for positive change and to challenge discrimination. Events like this underline how football can promote community cohesion and can be a lever to educate young people.” 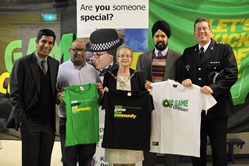 Troy Townsend the Mentoring and Leadership Manager from Kick it Out said “In recent months the issue of racism in football has again raised its ugly head. Kick it Out works throughout the football to challenge discrimination from grassroots levels up to the Premier League. Events like this help showcase how football can be used as a means of bringing about positive social change through working with young people. I was very impressed not only with the football but also the multi-agency support for the event.