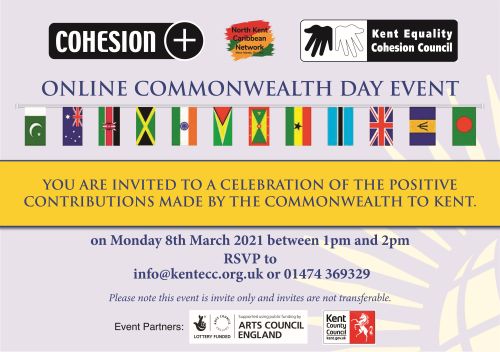 Kent Equality Cohesion Council in partnership with Cohesion Plus and the North Kent Caribbean Network delivered an online celebration to mark Commonwealth Day on Tuesday 9th March. Civic, community and faith partners saw an event that celebrated the many contributions made to the United Kingdom by Commonwealth communities here in Kent.

A key part of the event was the three short films that had been created focusing on education, health and policing featuring colleagues with links to the Commonwealth, talking about their lives, careers, challenges and the importance of celebrating Commonwealth Day. Those featured in the films included Deputy Superintendent Shaun White and Community Engagement and Hate Crime Manager Kulbir Pasricha from Kent Police and the Headteacher for Holy Trinity Primary School Denise Gibbs-Naguar.

Gurvinder Sandher, CEO of KECC commented, “We were so proud to deliver a Commonwealth Day event despite the lockdown. We wholly believe that we need to celebrate such events and recognise the many vast contributions the Commonwealth has made the United Kingdom. At challenging time for not just the Commonwealth but the whole world it is important that we celebrate what we have in common and what binds us together rather than perceived differences. We are incredibly grateful to the North Kent Caribbean Network for their valued partnership and together, we look forward to delivering many more community focused events.”