The Kent Equality Cohesion Council and Cohesion Plus have published a report titled “Public Perceptions Towards taking the Covid 19 Vaccine”. The report was compiled to better understand the reports of low uptake of the vaccine amongst BAME communities. The data used in the report was collected via an online survey which went out across Kent through community, faith and organisational networks and had in total 1,325 overall responses.

The report aimed to provide a snapshot across the diverse communities of Kent and their perception toward taking the vaccine if they harboured any reluctance or fear around this. Looking at national data around the disproportionate impact that Covid 19 had on BAME communities and media coverage of low uptake, the report also aimed to better understand whether BAME communities where in fact hesitant and if so, where the reluctance stemmed from.

Key findings from the report included:

The 21-34 age group was the most unlikely to take up the vaccine when offered whilst the 25-34 age group were most worried about taking it and also felt there was not enough information made publicly available around the vaccine.

In the area covered by Kent County Council, Gravesham, Maidstone, Swale and Dartford had the most responses both in terms of having confidence in the vaccine and also having concerns compared to the rest of Kent.

Two of the main reasons for vaccine hesitancy were concerns around fertility and the unknown long-term impact of taking the vaccine. Vaccine hesitancy for religious reasons did not come up in any significant way.

The location of where the vaccine would be administered was less important to British White respondents compared to BAME respondents. This was especially the case for Black British Africans.

Gurvinder Sandher, CEO of the Kent Equality Cohesion Council commented, “This report provides an insight into current public perceptions towards the Covid 19 vaccination in Kent. It is our intention to share the report with our health and local authority partners who are working on the vaccination programme. Over the coming weeks and months as the programme rolls out, particularly to younger recipients it is important that key messages around the safety of the vaccine are shared and the many myths that exists particularly over social media are debunked.

It is clear that there is some concern within particular age groups and BAME communities and we feel the only way to overcome some of these concerns is through clear messaging and dialogue. It is important as the vaccination programme accelerates that we are able to identify where vaccine hesitancy exists and work with those communities to overcome their fears.” 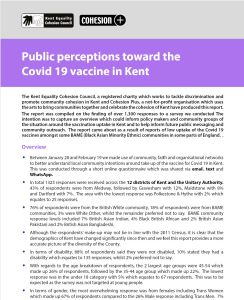