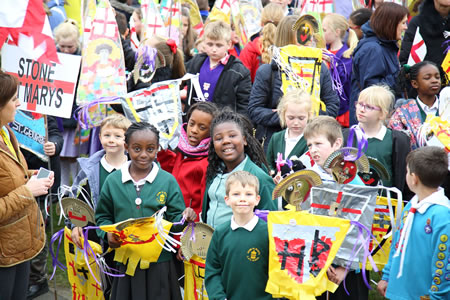 Preparations are underway for the Saint George’s Day celebrations which will be taking place in Gravesham and Dartford on April 21. The festivities have been organised by Kent Equality Cohesion Council in partnership with Cohesion Plus supported by Gravesham Borough Council, Dartford Borough Council and Arts Council England in what will be some of the biggest celebrations taking place in England.

Gurvinder Sandher CEO of Kent Equality Cohesion Council commented “We are really pleased to be again in a position to organise the Saint Georges Day celebrations in Gravesham and Dartford. I believe passionately that events like Saint Georges Day are a great way of bringing diverse communities together and celebrating our core values which makes England the country it is. As ever, I am very grateful to all our partners for their ongoing support and their belief in our work.”

In the build up to the day 21 local schools and some 1200 young people will benefit from creative arts workshops as they prepare for the parades which will be the highlight of the celebrations in the boroughs.

The celebrations in Gravesham will take place between 10am and 11.30am and in Dartford between 12.45pm and 2.30pm. Entertainment will include music from Premier Brass Band, Bollywood Brass Band, performances by Stilt Walkers, Morris Dancers, Shakespeare as well as a Saint George in full armour.

The aim of the events is to celebrate the patron Saint of England and bring together the diverse communities in Gravesham and Dartford through the arts to celebrate this important day. 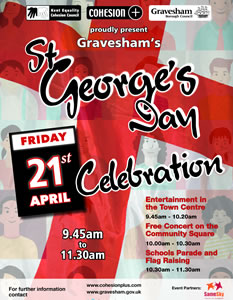 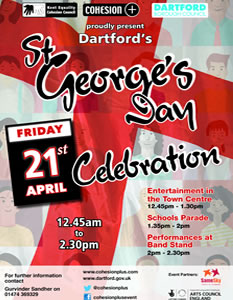