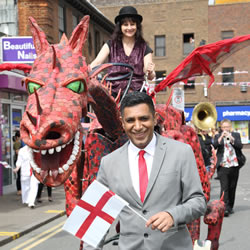 Some of the biggest celebrations in England to commemorate Saint George’s Day took place in Gravesham on Monday April 23rd. 600 Children from 14 local schools took part in the event which was organised by Cohesion Plus in partnership with Kent Equality Cohesion Council supported by Gravesham Borough Council and Arts Council England. The aim of the event was to celebrate the patron Saint of England and bring together the diverse communities in a large scale celebration.

The highlight of the celebrations was the schools parade which was led by Saint George enacted by Gravesham resident Russel Palmer who was followed by a large scale dragon. They were followed by the Mayor of Gravesham Harold Craske and local dignitaries and partners including the Police and Crime Commissioner Matthew Scott and Deputy Lord Lieutenants of Kent, Dr. Bhargwara Vasudaven and Rosemary Dymond.

The Parade went up the High Street into King Street, through Saint George’s Shopping Centre and then headed back through town before finishing on Community Square. Throughout the parade members of the public waved their flags of Saint George and encouraged the children as the parade went by.

Once the parade climaxed on Community Square the 600 school children sang Happy Birthday to HM The Queen to celebrate her 92nd birthday. The festivities climaxed with a special rendition of Land of Hope and Glory performed by Premier Brass Band and the Folkin Fusion Drumming Collective before the flag of Saint George was raised high above the Community Square as the national anthem was played by the Borough Band.

Gurvinder Sandher the CEO of Kent Equality Cohesion Council commented “This was a great example of how we have used the arts to bring communities together to celebrate Saint George’s Day. It is important we believe, to use events like this to celebrate our shared values and the positive community cohesion that exists in Gravesham. I was humbled by the positive response that I have received from members of the public and from those who have taken part in the celebrations.”