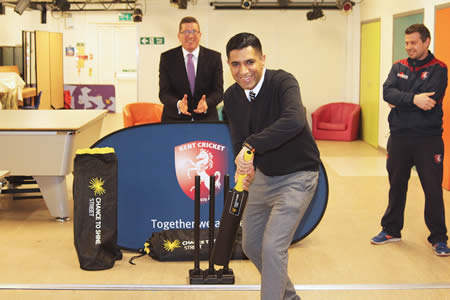 Kent Cricket Community Team in partnership with Kent Equality Cohesion Council, Kent County Council Youth Service and Kent Police have launched a free Street Cricket Project which will take place every Wednesday at the Northfleet Youth Centre on Hall Road which between 5.30pm and 6.30pm.

The official launch took place on January 25th 2017 with some 25 young people attending along with a number of guests including the Deputy Mayor of Gravesham Cllr Harold Craske, representatives from Kent Police, Kent Fire and Rescue Service, Gravesham Borough Council and Safer Kent along with community groups

The project will help to promote a healthy active lifestyle, along with educational workshops relating to the issues affecting young people while at the same time giving them access to play cricket.

According to Gurvinder Sandher the CEO of Kent Equality Cohesion Council “We strongly believe that sport is an excellent way of bringing young people together, breaking down barriers and promoting cohesion. We’re really excited to be working with the Kent Cricket Community Team and hope that over the coming weeks the young people will not only get an opportunity to play cricket in a relaxed environment but also benefit from talks from our partners around various topics including healthy lifestyles.”