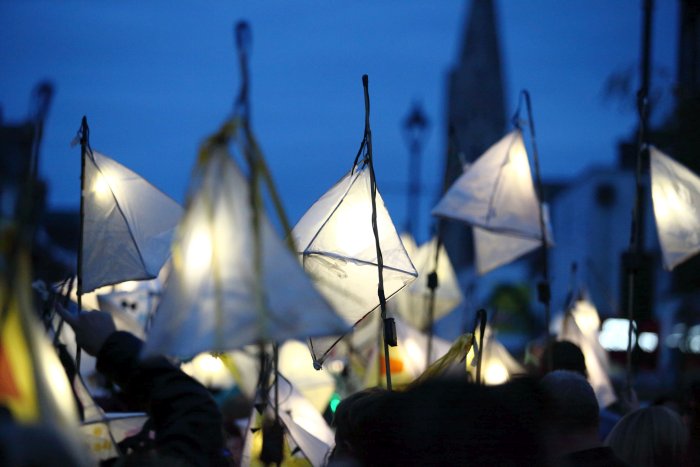 KECC was pleased to have been a partner on the Swale Fusion Festival of Light which took place on Friday October 12th in Sittingbourne working with Swale Borough Council and Cohesion Plus. The aim of the festival was to support community cohesion and celebrate shared British values shinning a light on the things that bind us together.

The Festival began in Sittingbourne High Street with spectacular performances from Bloco Fogo Samba, the Folk in Fusion Drumming Collective and the Stilt Batteristas which were enjoyed by the Chief Guests Deputy Lord Lieutenant Paul Auston and Deputy Mayor of Swale Cllr Ken Ingleton.

The Festival then continued with a special lantern parade featuring local residents and 8 local schools that had created lanterns around the values of respect, excellence, friendship and equality.

The celebrations climaxed in Albany Park which was specially decorated for the evening with ocean themed lights with a spectacular firework display.

Gurvinder Sandher the CEO of Kent Equality Cohesion Council commented “It was exhilarating to see so many people come together to not only celebrate the Festival but also our shared values that bind us together as a community. Seeing the smiles on people’s faces as the parade made its way through the town centre and their reaction to the musicians made all the hard work worthwhile. I just hope that we can raise the funds to deliver the event again next year working in partnership with Swale Borough Council.”