Kent Equality Cohesion Council showed its support for Parliament Week 2013, which ran from 15 – 21 November, by hosting an open event that aimed to help more young people feel connected with Parliament and democratic life, and inform them about how they could make a positive difference to society.

The event took place on Thursday November 21st at the Civic Centre in Gravesend and was organised in partnership with Vinbrooke Support Kent. Around 50 young people attended and they heard from a number of key note speakers about how local democracy operates and how Parliament works nationally and the role of a constituency MP. The speakers included the Leader of Gravesham Borough Council Cllr John Burden, the Leader of the Conservative Group Cllr John Cubitt, Finnian Rook from the office of Adam Holloway MP and Cllr Tanmanjeet Singh Dhesi the perspective Labour Party candidate at the Parliamentary election.

Gurvinder Sandher CEO of Kent Equality Cohesion Council commented “We were pleased to be taking part in Parliament Week this year for the first time, as we thought it was an excellent way of getting more people engaged with what really goes on in Parliament and also in terms of promoting local democracy. It was pleasing that both main political parties were keen to support the event and the feedback I have had from young people who attended has been positive. I am grateful for the support provided by our partners and young people who attended. This was the latest in a series of community events we have organised through our Promoting Cohesion and Engagement Project funded by Awards for All” 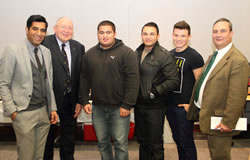 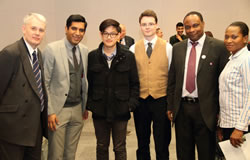