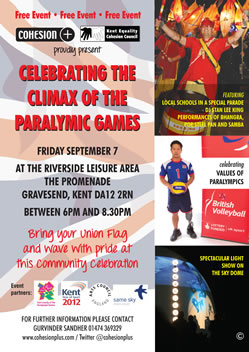 Kent Equality Cohesion Council in partnership with Cohesion Plus haveorganised a free community celebration to mark the climax of the Paralympic Games and the Great British Summer which has also seen the Diamond Jubilee Celebrations and the Olympic Games. This will be taking place on Friday September 7 on the Riverside Leisure Area.

Between 6pm and 7pm there will be performances on the Bandstand by Steel Ambition,Blogo Fogo and DJ Stan Lee King. Then the 9 local schools and some 300 young people who will be making special lanterns for the event which will promote the Paralympic Values of Courage, Determination, Inspiration and Equality will come into the arena school by school where they will receive a medal for their participation. This element of the event will climax with the National Anthem before the Lantern Parade departs led by Samba and Dhol Drummers to the Riverfront where the evening will climax with a spectacular light show on the Sky Dome which was been created by arts Company Samesky.

Gurvinder Sandher the Director of Kent Equality Cohesion Council who has organised the celebration commented “What I would like to do is invite as many people as possible from the local community to come and join in the fun and bring along their union flag to wave and support the children. 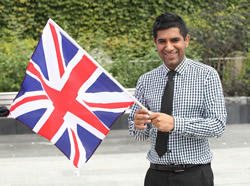 We have had a great British summer and I hope that as many people as possible will come and support us. It is important that we use events such as the Diamond Jubilee, the Olympics and the Paralympics to come together as one and celebrate what makes us British. I hope that local community groups, business and sports clubs will support our campaign and come and wave the flag on the 7th”