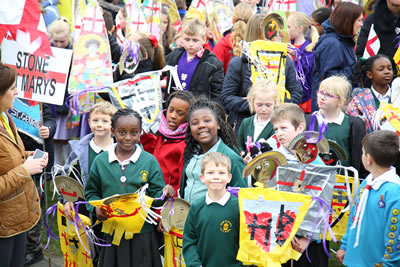 Friday April 22 and Saturday April 23rd saw the communities of Dartford come out in force to celebrate Saint George’s Day. The festivities which were organised by Cohesion Plus, Dartford Borough Council and Kent Equality Cohesion Council were some of the biggest in England.

The annual Saint George’s Day parade took place on the Friday and featured 500 children from 8 local schools. The parade was led North Kent resident Russel Palmer who was dressed up as Saint George and started outside the Civic Centre in Home Gardens before going over the footbridge, through Orchards Shopping Centre, into the High Street and then finishing at Central Park. The Mayor of Dartford Cllr Armitt also took part in the parade along with the Leader of Dartford Borough Council Cllr Kite, Dev Sharma the Chair of the Kent Equality Cohesion Council and Gareth Johnson MP.

The parade was greatly support by members of the local community, many of whom waved the flag of Saint George proudly. Entertainment in the parade included the Premier Brass Band, Bollywood Brass Band, Stilt Walkers, Four by Four Dhol Drummers, West Hill Morris and comedy duo Payne and Pearce.

Once the parade reached Band Stand in Central Park the children sang happy birthday to HM The Queen before seeing entertainment from some of the different groups involved. The event concluded with the National Anthem and the waving of Saint George’s flags.

On Saturday there were performances by the Premier Brass Band around the town centre and opportunities to take photos with Saint George as well as flags and badges being given out by Dartford Borough Council.

Dev Sharma MBE, the Chair of the Kent Equality Cohesion Council which is organising the celebrations commented, “We are really pleased with the positive response we received to the Saint George’s Day celebrations. Months of time and planning go into events like this but all the hard work is worth it when the local communities come out and support it like they did this year. I am also grateful to the support provided by our partners Cohesion Plus and Dartford Borough Council and we look forward to doing something even bigger next year.”

John Varah Artistic Director of Same Sky Arts who worked with the local schools commented “We always look forward to working in Dartford as the schools are such a joy to work with. I believe this year’s Saint George’s Day celebrations are some of the best yet that we have been involved with.” 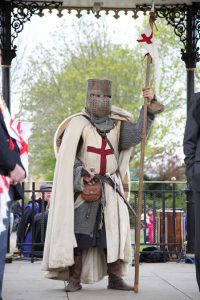 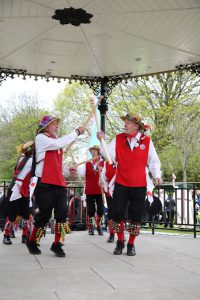