Some of the biggest celebrations in England for Saint George’s Day took place in Gravesham and Dartford on April 23rd. 30 local schools and some 1600 children took part in parades to mark the national day for England alongside a host of entertainers, community groups and members of the public.

The celebrations commenced in Gravesham in the morning where the streets were filled with members of the public waving the flags of Saint George, who with enthusiasm supported first the entertainment in the town centre and then the schools parade as it marched through. The celebrations climaxed on Community Square where further performances took place before the audience was addressed by the Mayor of Gravesham Cllr John Caller before the flags of Saint George were raised. 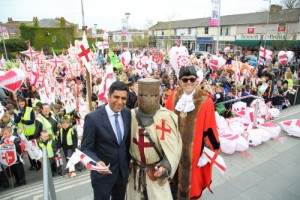 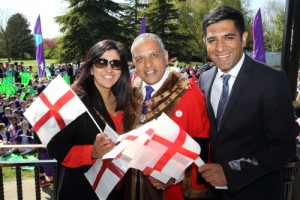 The programme then moved onto Dartford where large crowds gathered at One Bell Corner to see performances by Premier Brass, Bollywood Brass and West Hill Morris. For the first time the parade started outside the Civic Centre in Dartford before heading into the Town Centre, stopping briefly at the War Memorial where flags of Saint George were raised by the Mayor of Dartford Cllr Avtar Sandhu MBE. The celebrations climaxed at the Bandstand in Central Park with a rousing rendition of “Land of Hope and Glory” by the Premier Brass Band.

Gurvinder Sandher the CEO of Kent Equality Cohesion Council commented ““I am very pleased with the positive response that we have had today. Events like Saint George’s Day provide an opportunity to bring together our communities young and old, urban and rural regardless of faith or ethnicity and to celebrate our common values. I very much value the support of both Gravesham and Dartford Borough Councils and hope that other local authorities can see what a positive impact events like this can have in promoting positive community relations and showcasing excellent in the arts.”

The festivities were organised by Cohesion Plus in partnership with Kent Equality Cohesion Council supported by Dartford Borough Council, Gravesham Borough Council and Arts Council England.