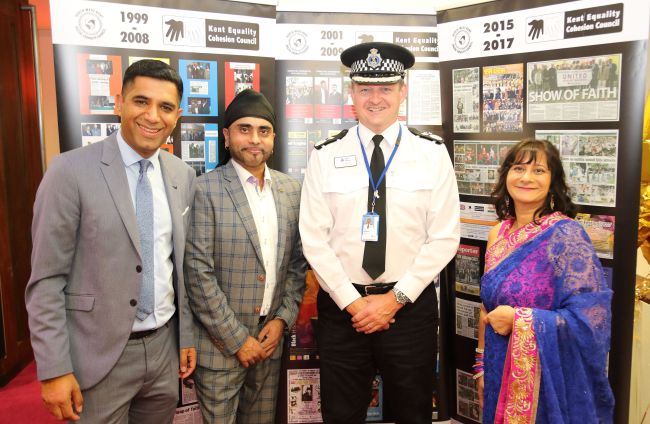 The annual Sadi Awaz Suno (Listen to our Voices) Women’s Conference took place on Thursday 20th September at the Woodville in Gravesend. The main ethos of the event was to raise awareness of where people can go if they need help and support and to push back on the traditional norms that exist within some communities from the Indian sub-continent, of staying silent in the face of issues relating to mental health, addiction and domestic abuse.

The audience of around 250 women heard from one of the leading bhangra musicians in the UK Bhupinder Kullar who is better known by his stage name ‘Tubsy’ from the Shanti Project. He spoke at length about his battle with alcoholism and his subsequent journey to recovery. Tubsy urged the audience to encourage the use of support services and to move away from the cultural norms that exist within some communities from the Indian sub-continent, where alcoholism isn’t necessarily understood or addressed.

Deputy Chief Constable Tony Blaker from Kent Police also spoke, touching on subjects such as the force’s outreach work with residents in reference to domestic abuse, modern day slavery, hate crime and the importance of working in partnership with local communities.

Gurvinder Sandher the CEO of the Kent Equality Cohesion Council commented “I am pleased that so many women from across North Kent attended the event. It is vitally important that members of the local community develop a better understanding of issues that could affect them and their families such as alcohol addiction and mental health. These are issues which are not traditionally discussed amongst communities from the Indian sub-continent. This is way we hold this event as we want to raise awareness of often taboo subjects”.

According to Carol Gosal Rethink Mental Illness Service Manager for Kent, “We have been organising the Sadi Awaz Suno Conference for 12 years now. This year for the first time we spoke about alcohol addiction and the feedback we have received from those in attendance has been very positive. This is an issue that affects families but is not often discussed openly especially around where they can receive help and support.”