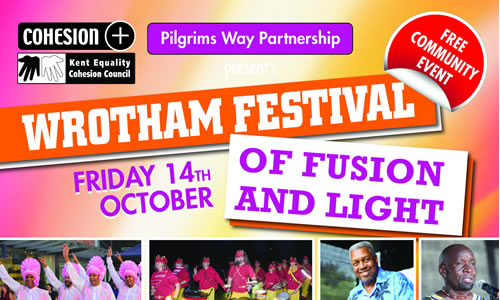 Colourful lights, a lantern parade, music and fireworks will come to the rural village of Wrotham which plays host to the 4th Wrotham Festival of Fusion and Light on Friday October 14.

Organised in partnership by Cohesion Plus, Kent Equality Cohesion Council, Saint Georges Primary School and the schools in the Pilgrims Way Partnership, the Festival takes place in 3 distinct parts.

During the first phase there will be a fusion performance by Phase 5 Steel Band outside St. Georges Church as the children prepare for the lantern parade.

The second phase begins with the lantern parade between 6.15pm and 7pm involving some 500 people as well as entertainment by the Bloco Fogo Samba Group, Four by Four Bhangra and Uzambezi African Arts.

The festival will climax with a fireworks and lights finale by Phoenix.

According to Gurvinder Sandher the CEO of Kent Equality Cohesion Council “Much of our work takes place in the urban area of Kent, so it is great that we are able to work in a rural area to promote cohesion and bring communities together. We are grateful for all the local schools taking part and the on-going support provided by the local community.” 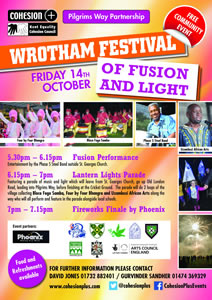