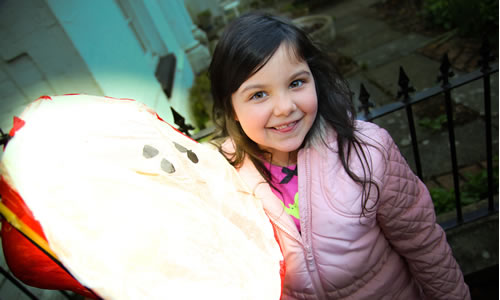 Bright lights and colourful vegetable inspired lanterns lit up a chilly autumn night in the rural village of Wrotham on Friday 14th of October. The Wrotham Festival of Light which is now in its fourth year was opened by Phase 5 Steel Band outside St. Georges Church; they were followed by African ensemble Uzambezi, Four by Four Bhangra Dancers and Blogo Fogo Samba.

Following the performances the lantern parade which celebrated the diversity of Kent and the Harvest Festival made its way through the village. The parade featured parents and pupils from 4 local schools; St. George’s Primary, Trottiscliffe Primary, Platt Primary and West Malling Primary.

The festival reached its climax on the grounds of Wrotham Cricket Club where a spectacular firework and light show took place.

According to Gurvinder Sandher the CEO of Kent Equality Cohesion Council “I am very grateful to everyone who attended and supported this community celebration. Events like this are important in rural communities as a means of promoting cohesion and providing new experiences for those in attendance. The feedback we have received has been positive and I hope we can replicate this event in other parts of Kent in 2017.”

David Jones the Head teacher of Saint George’s School commented “The pupils really enjoyed the whole experience, from preparing the lanterns in special workshops in school, to seeing culturally diverse artists perform in the heart of the village to taking part in the lantern parade. It is important that young people get a chance to experience new things and we hope to work with our partners to put on a similar event next year, hopefully with even more local schools involved.”

The Festival was organised in partnership by Cohesion Plus, Kent Equality Cohesion Council, Saint Georges Primary School and the schools in the Pilgrims Way Partnership and was part funded by Arts Council England.